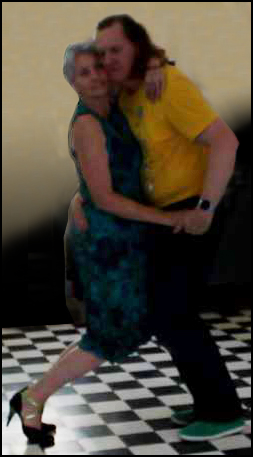 Canyengue is a a low-impact couples dance that is an early precursor to Argentine Tango. Danced since the 1900s and perhaps as early as the 1880s, it languished from the 1930s onwards.  Three key couples in Buenos Aires drew on family and personal memories in the 1980s to revive it, and this playful, improvised dance is now regaining  the popularity it enjoyed a century ago.

Now Myk Dowling and Ann Smith are bringing Canyengue to Canberra with regular lessons and practicas.

Regular lessons and practice are offered from 7:30 to 9:30pm on Thursdays in blocks of 4 weeks. A half-hour extension class starts from 7.30, followed by a half hour of fundamental techniques from 8:00. From 8:30 there is a one-hour practica, offering canyengue dancing  to a variety of music in a social atmosphere.